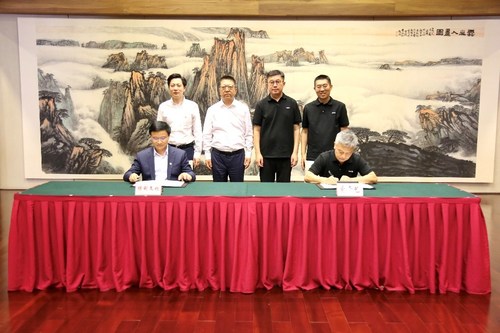 BEIJING, July 21, 2022 /PRNewswire/ — iQIYI, an innovative market-leading online entertainment service in China, announced on Jul. 19 that it has reached a strategic agreement in Beijing with Poly Culture Group Corporation Limited. As the corporation touches on many aspects of the entertainment content ecology and integrates both companies’ online and offline resources, it helps accelerate innovation and growth across different products and operational paradigms, which will further contribute to the sustainable and healthy development of the cultural and entertainment content ecology in China.

According to the agreement, the corporation between iQIYI and Poly Culture will focus on various areas, including the investment and production of films and television contents, live theatre production, arts and children’s education, membership sharing and ticketing, location-based entertainment, cultural real estate, and joint development of virtual idols and other Intellectual Property (IP) derivatives.

“Committed to content and technological innovation, iQIYI has laid a solid foundation that can now be leveraged by both companies to deliver additional value and carve out more opportunities,” said GONG Yu, Founder and CEO of iQIYI, “I look forward to seeing the synergy that will be created as iQIYI and Poly Culture bring out their best through the corporation, which will build a strong basis for future partnerships where the two companies can continue to explore collaborations.”

WANG Bo, Poly Culture’s General Manager, also highlighted the shared development goals and the opportunities between the two companies’ visions, noting that the both sides will jointly integrate resources across the supply chain and fully leverage each other’s advantages and unleash new growth potentials together.

Poly Culture is rich in its offline resources. The company has a strong presence in theatres, film production, auction, art education and art museums, and it leads the industry in many of the segments it operates in. It currently directly runs 68 cinemas and runs 248 franchised cinemas as well as over 70 theatres.

Over the years, iQIYI has built up a large reserve of digital assets and IPs. With its diverse ecology of entertainment content as the foundation, iQIYI leverages its IPs to build different kinds of content, and the development of diversified IP franchises further enhance the viewing experience as it increases the variety of content options. For instance, Luoyang demonstrated the strength of iQIYI’s IP franchise development capability, with the iQIYI Chinese Historic City Universe (iCHCU) finding expression in films, dramas, animations, comics, variety shows, documentaries, theatre productions, Virtual Reality (VR) content and role-playing games.